How will the Predicted Recession Affect Study Abroad Aspirants ?

With the COVID-19 situation worsening in popular study abroad destinations such as the US, the UK, Australia, and Canada, it hasn’t been an easy ride for international students. Thousands of students have been forced to return home since the outbreak of coronavirus. International students from countries such as India, China, Germany, France, Middle East, South Korea, Brazil, and Japan are among the most affected.

According to the World Economic Forum’s (WEF’s) latest report, the US economy lost 701,000 jobs in March 2020. According to the Bureau of Labor Statistics, this was just the number of nonfarm payroll jobs. This was seven times more the number that had been predicted by expert economists. 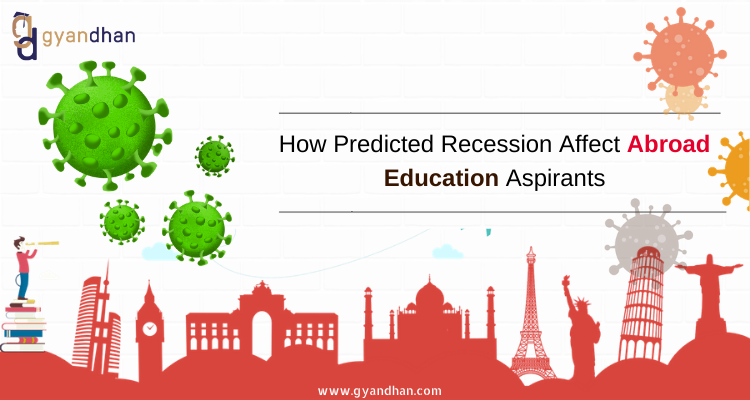 In other parts of the world, governments are stepping in to pay people’s wages, to prevent companies from announcing layoffs. A few weeks ago, Rishi Sunak – the U.K.’s chancellor of the exchequer, made an announcement regarding grants. The announcement was that the government would offer grants covering 80% of the salary of retained workers, up to a total of 2,500 British Pounds per month. Around the same time, US President Donald Trump signed off a 2 trillion dollar stimulus package bill to help American citizens by sending out cheques of up to 1,200 US Dollars from the second week of April. Governments of nearly all countries are doing something or the other to support their citizens, and this is a great move. But this is a temporary move, and there is another catch to it. Since the government is using its own money – or rather citizen’s money – economies are bound to fall flat on their face. Most economies are already on the verge of decline, and a recession is evident. This recession is going to be perhaps the biggest ever – bigger than any recession we have witnessed during our lifetimes.

Get Free Help In Abroad Admissions

How Will the Recession Affect Study Abroad Aspirants?

The abroad education market has been hit the hardest due to recession. Enrolled students are worried about the completion of their course, while students who have recently enrolled are worried about delays in the process. At the receiving end of this situation are the study abroad aspirants who have no idea as to what shape their plans will take in the months to come.

However, a lot can be learned from the Great Recession that took place between 2007 and 2009. Major learning was that recession led to a rise in school and college intakes. According to L Dhanasekaran, head of Education UK, south India (during the year 2008), the number of applications from south Indian students for UK universities had doubled since the start of the recession.

The predicted recession will directly affect aspiring students in many ways. Let us look at a few major changes abroad education aspirants can expect if the recession takes place as predicted :

Overall, the predicted recession would definitely affect abroad education aspirants directly. But with time, its implications would wear off and that is what students need to be ready for. Acquiring a quality degree in the meantime is perhaps the only thing that can help them tide this storm.