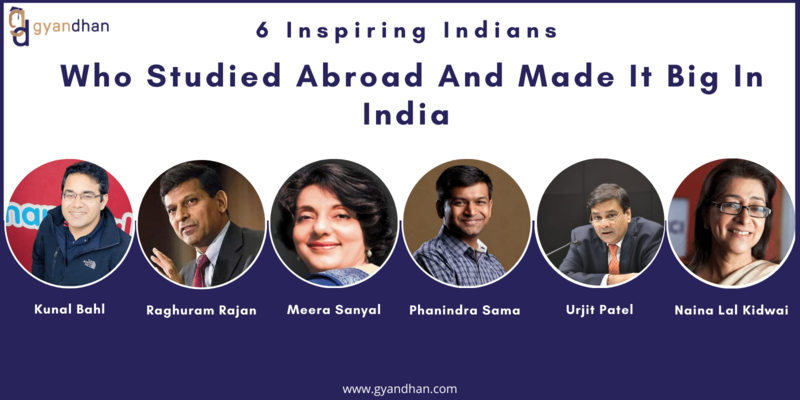 When Trump announced a temporary ban on H1B visas in June 2020, students were suddenly surrounded by sheer skepticism about their US dreams. The doubts were certainly legitimate considering the equally confusing times. Though the rules were relaxed later on, a million-dollar question that evoked in everyone’s mind is can those who return to India after abroad studies can still make it big in life & career? The answer is a big YES!
A job abroad is usually considered to be the next step of an international degree for many reasons. The international exposure, more opportunities,  vast job market, earning in a foreign currency, high salary packages, are just some of them. The top abroad student destinations like the US, UK, Canada, all boast of a booming economy and offer the students professional and personal growth. While the lure and benefits of an international job market cannot be denied, students often overlook their home country to build a career. Developing economies, like India, offer a burgeoning market, opportunities to explore, and make a successful career.

Kunal Bahl graduated from the Wharton School of Business at the University of Pennsylvania and bagged a job at Seattle-based Microsoft. However, US Immigration rejected his H1B visa application, prompting his return to India. The rejection paved the path to success for him as within 3 years, Kunal launched Snapdeal along with his friend Rohit Bansal. Since its inception in 2010, Snapdeal has reached many milestones and has become one of the largest e-commerce marketplaces in India. It was valued at 6.5 billion in 2019 and has only grown since then, with its network covering more than 26000 pin codes across India. His story stands testimony to the fact that sometimes rejection can be just the break you need to seize the opportunity.

The 23rd Governor of Reserve Bank of India holds a Ph.D. from Sloan School of Management at MIT. A highly distinguished academician, he is also a venerated economist who left an indelible mark on the Indian economy. Raghuman Rajan has also served as the Chief Economist at IMF. At 40, he was the youngest individual to ever hold the position. His contribution to the discourse of the economy has been unparalleled with numerous publications of essays and books. He has won several international awards for his groundbreaking research on economic policies around the world.

Meera Sanyal was the CEO and Chairman of the Royal Bank of Scotland in India. Apart from the impressive achievement, Meera had also graduated with an MBA from INSEAD, France. INSEAD is one of the top Business Schools in the world with several notable alumni. Meera, in her 30 years of banking service, financed more than 6 lakh women in rural India and chaired the bank’s Foundation that provided livelihood assistance to more than 7 lakh women-led households. She was a distinguished banking professional in India and an inspirational figure who also contributed to empowering women through entrepreneurship.

Our next trailblazer is also a graduate from BITS Pilani, Indian Institute of Science, and Stanford University. An exceptional entrepreneur, he came up with the idea of an online bus ticket booking platform one day when he missed his bus during his stint in the US. RedBus is an online bus ticketing platform allowing customers to book bus tickets with a global presence in 6 countries. The company since then has received multiple awards such as the 13th most trusted internet brand, the most innovative company by Business Standard, and more. Phanindra Sama is a successful entrepreneur who is currently serving as a Chief Innovation Officer with the Government of Telangana.

Urjit Patel was the 24th Governor of the Reserve Bank of India, a successor of Raghuram Rajan. His academic profile is also decorated, with degrees from prestigious international universities. He earned a bachelor’s degree in Economics from the London School of Economics, followed by an M.Phil in Economics from Oxford, and finally a doctorate from Yale University. He landed a job with the IMF after obtaining his Ph.D. in 1991. Since then, he has served in a number of important positions within the Government of India at both Central and State levels. It was during his tenure that the significant step to curb corruption was taken, namely the demonetization of the 500 and the 1000 rupee notes. Though the debate on the success of the move can continue for years, none can refute the eminent work done by Urjit Patel to tackle inflation in India as a Deputy Governor under Raghuram Rajan and is often known as the ‘inflation-warrior’ of Rajan.

She is a distinguished figure in the world of financial services and has received a Padma Shri for her contributions in the area of trade and industry. She was the first Indian woman to graduate from the Harvard Business School with an MBA in 1982. Along with this, she was also the first woman president of the Federation of Indian Chambers of Commerce and Industry (FICCI) and the first woman to head a foreign bank’s operations in India. Her landmark contributions placed in the Fortune Global List of Top Women in Business, as well as in the Time Magazines’ 15 Global Influentials 2002. Currently, she is the chairman of Max Financial Services, as well as serving with Comptroller and Auditor General of India, CII, and FICCI.

These are just some of the thought-provoking examples of Indians building a successful career in India after graduating with an international degree. Not every student can become the next Kunal Bahl, but you sure can dream to achieve great heights. An abroad degree is not the sole reason for the success of these individuals, though its role as a great stepping stone for career growth cannot be refuted.

The inspirational stories of people like Kunal Bahl is a testament that the door to a great career can be found even in rejection.
To plan your abroad education without breaking a sweat, you can contact GyanDhan.

Ankit Mehra
Ankit is the co-founder and CEO of GyanDhan. An IITK / IESE alum who previously worked at Capital One / Credit Suisse, his aim is to equalize and expand access to higher education. His interests include playing football (soccer), and basketball, trading/investing the limited money that he still has, and discussions on economics / politics.