How To Convert A Grade In India To The US 4.0 GPA Scale? 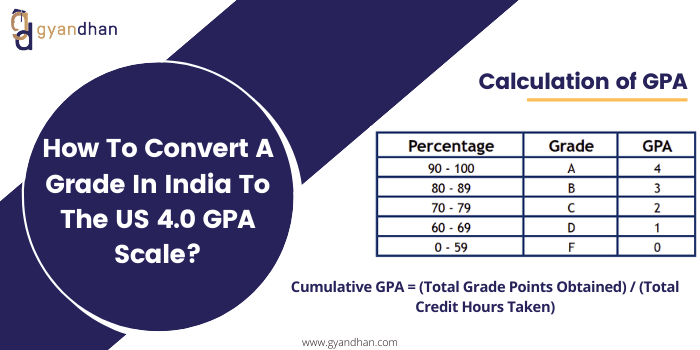 There are about 195 countries in the world, give or take a few. Each nation has hundreds, if not thousands, of colleges. Each school and each country has its own method of evaluating a student. For example, in European countries like Austria scholars are not given a specific grade rather they tell whether the student did sufficiently or not. The grading system in India is most often percentage. Countries like Germany utilize the 1-5 score and places like the Netherlands apply the 1 to 10 order.
It proves that there isn’t a single standard method of grading system in education, worldwide.
In this blog, we provide information about the grading system of the knowledge capital of the world i.e. the USA.

How is US Grading Different From Other Countries?

The US gives marks in a slightly different manner. Most of the colleges and universities in America choose a five-point system which provides letter-grades to students. They are:

Why is the Grade E Missing?

The grading system in the US lacks the letter E. The reason for it dates back to 1897 when the lowest grade a pupil could get was E. With the start of the 20th Century, the student to teacher ratio in the country magnified because:

To make it easier for the parents and reduce the teacher’s effort to explain the same, E was switched with F which is intuitively understood to mean Failed.

What’s the Meaning Behind Each Letter?

There is more to the US grading system than an A which tells a student they did exceptional work and an F which marks a failing grade. Each letter has a percentage meaning behind it. The table below shows what each letter is equivalent to 100-marks scoring.

How is the GPA Calculated?

The letter-grade a college or school gives a student has a corresponding quality point. The quality point is a numerical quantity linked to the grade. The table underneath is used to convert each letter-grade into a grade point.

Let’s say in a Biology class a student gets 95 marks out of 100. The letter grade based on the marks is A, and the corresponding GPA is 4. When the school year finishes, a cumulative GPA is calculated using the formula:

The Total GPA in a subject = Grade in the class X Credit hours of the class.

Picking up the previous example, let’s say the student took one more class of Math and got 88 out of 100 which means a GPA of 3. If both, Biology and Maths, classes were for 3 credits each, then the cumulative GPA of the student would be:

While some universities stick to the 4.0 scale, most colleges implement a more detailed grading that is shown in the figure below:

How to Convert Indian Grade into a US-GPA?

Most schools and universities in India choose the percentage system to grade scholars with a few exceptions who utilise a 10-point scale or a percentile. The latter is computed by dividing the percentage by 10. Based on the percentile or percentage earned, there is a further division of marks:

To convert a division into a US grade, refer to the table underneath:

To convert a percentile or percentage into the US accepted GPA, remember that each grade corresponds to a quality point. So, 10.0 Percentile or 100% is equal to the highest quality point on a 4.0 scale. WES provides a rough estimation for it:

Do You Need WES Evaluation?

The table and formula given above are either a raw conversion or applicable for a single percentage. A better option is to let WES evaluate your transcripts. Few universities, such as University of Houston, mandate this for all international applicants. If your education was not in the English language, all universities in the US will mandate a WES evaluation. The assessment will provide a more precise and accurate translation of Indian grades and education credentials into 4.0 scale.
To get an estimate of how your grades compare to the US grading system, you can also use the free Indian percentage to US GPA converter or GPA Calculator.

Think Before Converting To 4.0 Grade

When applying to colleges in the United States for graduate or postgraduate degrees, each application has one common question: ‘state the GPA obtained in school or college.
The smartest decision is to mention the CGPA, percentile or percentage printed in your transcripts. The reason being there is no foolproof method of marks conversion, at present. Besides, colleges in the US are aware of the India grading methodology which is why their top universities specifically request applicants not do so.

To the Frequent Query:

Do I need to calculate my GPA if it is not given on my transcript?

Yale answers: “No if your GPA is not reported on your transcript, you should not calculate it for the application. Please report the same GPA that is listed on your transcript.”
Columbia says: “Applicants should report their grade point average as it appears on their transcript.”
Stanford replies: “Report your undergraduate grade point average and the scale used by your institution.”
The only time a student should convert a percentage or CGPA into a 4.0 GPA is when a college explicitly asks them.