How is IELTS Score Calculated?

Why is the IELTS Score Important?

The International English Language Testing System (IELTS) measures the language skills of individuals planning to study in locations where the English language is used as a means of communication. Colleges from many countries including the US, UK, Canada, New Zealand, and Australia use IELTS scores to assess an applicant’s proficiency in the English language. Universities mandate a minimum IELTS score which applicants need to fulfill to be eligible for admissions. An IELTS score equal to or higher than the criteria indicates that the future international student is skilled enough to effectively finish an English-language degree program and thus increases his/her chances of getting an admit from the university of his/her choice.

To measure the candidate’s proficiency in English, the IELTS adopts an extensive process to calculate one’s test scores. Though easy, it is lengthy and constitutes many levels owing to the multiple sections and score determinants the test has. Given below is a detailed and step-by-step breakdown of how the IELTS score is calculated. Before aiming for that perfect IELTS score and progressing with IELTS preparation, candidates should first get a detailed insight into the IELTS scoring mechanism, so that they have a clear idea of the mode of assessment and marking scheme. One can also find here the performance records of the past test-takers to get an idea of the odds of scoring above a particular mark in the test. 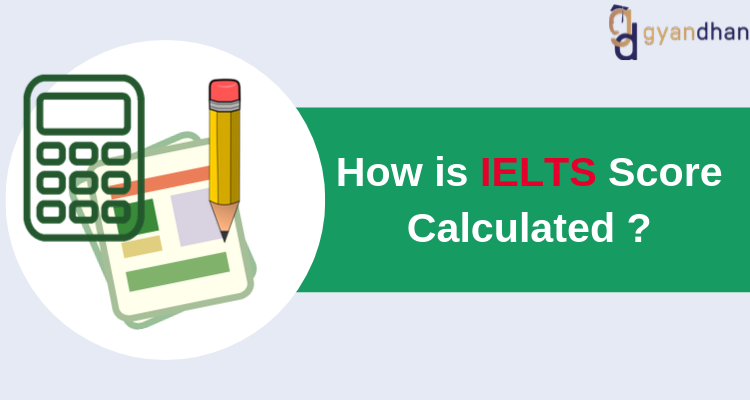 What are the Two Types of IELTS Scores?

For each of the four sections of the exam, students are given a band score (sectional band score) ranging from 0 to 9 in half-point intervals (9 being the highest score possible). Test-takers are also provided a total or an overall band score of 0 to 9 which is calculated by adding together the four section scores, dividing the total by four, and then rounding it up or down to the closest half-point. For instance, 6.5, 5.5, 6.0 and 6.5 sectional band scores add up to 24.5. The overall score is then arrived at by dividing this total by four which comes out to be 6.125, generating a complete 6.0 band score.
The same scoring scheme is used for both IELTS academic and general training exams.

Now we break down the whole IELTS score calculation into two parts, starting with the overall band score calculation process. The Overall Band Score is the four-component average score, rounded to the nearest whole or half band. This score is calculated from 0 to 9 bands. The score to the next half or whole band is rounded up or down. There are some examples below to make this marking scheme clear.

A tabular representation of the above examples to make the calculation process clearer:

How are the IELTS Sectional Band Scores Calculated?

Now we come to how the sectional IELTS band scores are calculated. IELTS is an examination consisting of multiple levels. The score for each level is called sectional band score. For each segment, you can get a score between 1 and 9. Half results such as 6.5 are possible.
While universities normally require an overall 6 or 7 IELTS score, most of them also mandate a minimum score for each section.
Following is a section-wise breakup of how sectional band scores are calculated and their criteria of assessment for all the four sections - Reading, Writing, Listening and Speaking.

How are the IELTS Listening and Reading Scores Calculated?

The band scores for the listening and reading exams are calculated using the tabular chart given below. Each of these two sections includes 40 questions. You gain a mark for each correct answer and lose 0 marks for an incorrect answer. On the basis of the number of correct answers and the scores secured, you get the following band scores:

How is the IELTS Writing Score Calculated

Each of these criteria is awarded a score between 0 and 9. All of these scores are then averaged to arrive at the total score. Please note that the weightage given to task 2 is double of that assigned to task 1.

How is the IELTS Speaking Score Calculated?

The speaking test is also marked out of 9 according to the following criteria:

This section too has performance descriptors for band scores which IELTS candidates can check here to understand the factors they will be judged on in the speaking test.

What is IELTS Band Score Descriptions?

For each Band Score obtained, IELTS defines the candidate’s level of proficiency in English and also elaborates in detail on his/her strong and weak areas in the language. The Band Score Descriptions followed by IELTS are given below in the table.

IELTS Past Performance Records: A Glimpse

Now that we know the specifics of the test, let’s also take a look at the general performance of IELTS test-takers over the past few years so that we can gauge the difficulty level and possibility of success in the test. Given in the table below shows the percentage of IELTS takers scoring a certain band score in the IELTS test. The IELTS takers have been organized into different groups on the basis of their reasons for taking the IELTS test. The table defines the performance demographics of each group. Readers for their information may scroll to their specific reasons and check the demographics. These demographics may allow candidates to conjecture on how difficult or easy it is to obtain a certain score.

Also, you can check the mean overall band and sectional scores for Indian IELTS test-takers in the table below.

The aforementioned was a detailed insight into the IELTS scoring mechanism. Now, from the above tables, candidates may have inferred that it is indeed difficult to get 7 as both overall and sectional band scores, which is normally the minimum requirement set by universities abroad for applicants seeking admissions. However, if one prepares for IELTS meticulously and consistently, one could easily obtain a decent score in the test.  Keeping these scoring mechanisms, performance descriptors and parameters of assessment in mind, candidates should now start preparing for the test at a full-swing. And if you are in the dark as to how to go about IELTS preparation, you can check out our intensive IELTS section-wise preparation guide here.

How to Plan your Education Loan Repayment