IELTS vs TOEFL vs Other English Exams

Why are English Assessment Exams conducted for Students Going Abroad to Study?

You may have stumbled upon many advertisements for English assessment tests like IELTS and TOEFL in newspapers, on the internet or on college websites and wondered what these tests are and who they are meant for. Let’s shed more light on why these tests are conducted in the first place.

Suppose you want to study or work abroad in an English-speaking country, but English isn’t your first language. Since all formal modes of communication in the country will be conducted in English, you will first have to exhibit a reasonable level of proficiency in the language. Hence, universities, immigration departments, professional bodies, and employers require applicants to take an English language assessment test to measure their ability to overcome the linguistic gap and conduct communications smoothly in the English language.

A high score in these tests is one of the most important eligibility criteria for applying to universities or jobs as it is indicative of the student’s proficiency in the language. On the other hand, a low score risks a rejection of work or admission applications as it denotes the inability of a person to communicate in English and facilitate a legible communication. 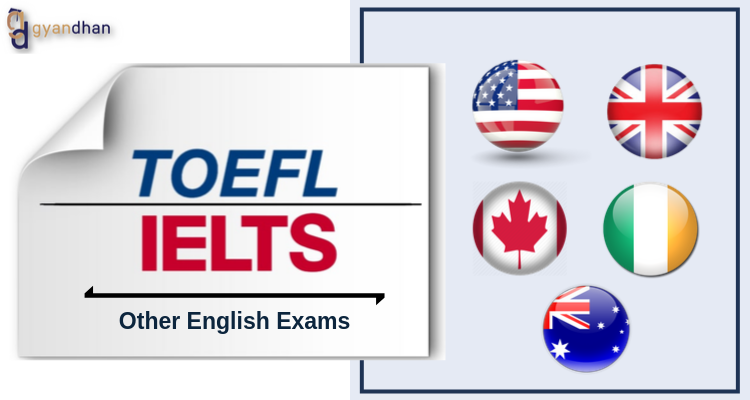 Get Help In Admissions Abroad From GyanDhan! Fill Up This Form Quick!

What are the English  Assessment Tests Other than IELTS and TOEFL?

When it comes to English as a Foreign Language assessment test, the only tests that come to one’s mind are IELTS and TOEFL. However, contrary to popular perception, there are many other assessment tests too with specific purposes. Some of these are TOEIC, OPI, OPIC, and the Cambridge English Exams. Let us take a look at what these tests are and what purposes they serve:

There are other exams too,  but these are the most popular and widely accepted ones.

Which Tests are Preferred by Foreign Countries for Admissions?

IELTS vs TOEFL vs other English Exams

Given in the table below is a detailed overview of all the English language assessment tests listed above covering their salient features like conducting body, difficulty level exam pattern, frequency of the conduct, a medium of the test and so on.

IELTS vs TOEFL vs TOEIC vs ESOL

Which English Language Test Should I Take?

Now that you know the different types of English as foreign language assessment tests, you may be confused as to which test you should take for studying or working in a foreign country. Well, the test that you should take will ideally depend on the following factors - a) your aims and objectives for going to a foreign country, b) country you want to go to, c) if you fit the eligibility criteria for the test. Below we have listed down these features for all the tests which you can check and determine which one is the best as per your needs and profile.

There is no official age limit for taking the exam, and students most commonly sit for the CAE exam while in 10+1 or 10+2 secondary education to apply for undergraduate courses in the U.K., Canada and/or Australia. It is however advised to submit test scores within two years of one's application to study abroad. One can sit for the exam as many times as they require/want, although they cannot register for the same exam twice in the same month.

Now that you have got an extensive insight into the different kinds of English language assessment tests and have also got a fair idea of which test suits your requirements the best, the next step is to start off with the preparations. If you have decided to take the IELTS and are looking for a preparation tips and advice, then waste no time and click here for a section-wise IELTS preparation guide prepared by us.