Is MS in Computer Science Abroad Worth It If You Are Already Earning Well in India? 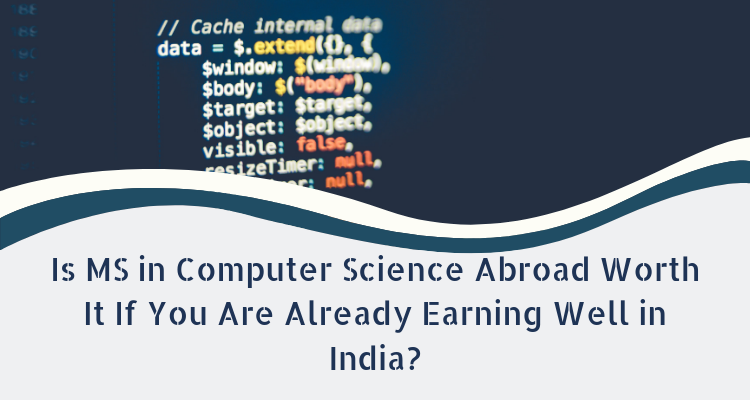 Computer Science is one of the most popular subjects in India, and an increasing number of students have been seen opting for it. A large number of students studying computer science can be attributed to the fact that this field promises a high-flying career and a well-paid job. This lure of a bright career also motivates many Indian students to pursue an  MS in Computer Science from abroad. Most students who aspire to study abroad assume that it will open up a plethora of job opportunities after MS in Computer Science and provide them with the maximum global exposure. However, is that really the case? Let us take a look. If you are such a student who has been mulling over whether to quit your well-paying job and head abroad to study MS, then read ahead to know if it is worth it. For the benefit of our readers, we will take up the top four best places to study MS in Computer Science - U.S, Australia, Canada, UK, and Germany - and help them understand if it is worth quitting their job to study an MS in CS at these countries.

Fill This Form And Get Personalized Help From An Admission Expert

Should You Go? Do an Opportunity Cost Analysis

Conducting an opportunity cost analysis is the best way to understand whether it is prudent to leave a well-paying job in India and head abroad for an MS in Computer Science. Comparing the amount invested in pursuing an MS in CS from abroad with the number of opportunities and return on investment available to you after completing the MS in CS abroad is one way to decide whether to take the plunge or not. We understand that this is easier said than done, and hence to help our readers with this, we at GyanDhan have come up with an estimate future earnings tool. Based on a student’s current salary, chosen field of study, and the global ranking of the target college, this tool will give students an NPV figure.

What is an NPV?

NPV = Money saved abroad - Expenses are borne while studying abroad - Money that could be saved in India by continuing with the current job, discounted to the present at 8% per annum.

In this blog, our readers will come across two more terms, namely profit and IRR. Profit is the net extra savings that students make when they choose to study abroad or work there. IRR refers to Internal Rate of Return. IRR is the discount rate that makes the NPV of all cash flows, for a particular project, zero. For our readers, a choice with a higher IRR will be better than an option with a lower IRR.

For our analysis, we have taken all the standard factors into account and have made a few standard assumptions too which are as follows:

With these assumptions in mind, let us start answering the original question - whether it is worth studying MS in CS abroad if you are earning well in India. For this, let us look at the top five countries one by one. Since there is a large number of colleges in each country, we have clubbed the colleges in four rank groups and will be taking a look at each of the groups for three different salary levels. Scroll down to your salary level to see results for your profile. If your salary level happens to be in between the numbers we’ve taken here, you can either interpolate for an approximate result or use our estimate future earnings tool - for a more accurate picture.  So, without further ado, let us begin.

The United States of America

For a Current Salary of INR 5 lakh in India

Verdict - As we see from the above table, the NPV is positive and very high for all rankings in the US. Hence, if you are currently earning INR 5 lakhs in India and get a chance to do an MS in CS in the US, you should certainly choose to do it.

Verdict - On studying the above table, we again see that the NPV, IRR, and profit are all very high for US colleges of all rankings. So, if you are an Indian currently earning INR 15 lakhs in India and get a chance to study MSCS in the US, then you should definitely go for it.

For a Current Salary of INR 25 lakhs (India)

Verdict - For those who are earning INR 25 lakhs in India, it only makes sense to study MSCS in the US if the college ranks within the top 50 globally. For all other colleges, the NPV is negative. The profit too is very low (for colleges ranked between 51 and 100) or negative for lower-ranked colleges. This means that the students would earn and save more (except for colleges ranked between 1 and 50) by continuing to work in India, and thus it is not worth pursuing an MSCS in the US in colleges ranking 51 and 500 globally.

For a Current Salary of INR 5 lakhs (India)

Verdict - The NPV seen here, for the colleges of all rankings, is positive and high - indicating a profitable investment. This means that students who are currently earning INR 5 lakhs a year should opt to study MS CS in Canada.

Verdict - This table makes for interesting reading. Even the top 50 global universities are negative - this is because of the high average cost of such universities. Average cost reduces in universities ranked 51-100 globally, as a result of which the NPV becomes positive. For colleges ranked below 101, NPV is negative, despite their low cost of education. We can thus conclude that Indian students who are currently earning INR 15 lakhs a year may study an MS in CS in a Canadian college which is ranked in the top 100. Colleges ranked lower than that are not worth quitting your current job in India.

For a Current Salary of INR 25 lakhs (India)

Verdict -  NPV, IRR, and Profit for students earning INR 25 lakhs a year are negative. We can thereby conclude that it is not a good idea for such students to pursue an MS in CS from Canada.

For a Current Salary of INR 5 lakhs (India)

Verdict: We see a high and positive NPV, IRR and Profit for colleges of all rankings. This means that if a student is earning INR 5 lakhs a year in India currently and has the option to study MSCS in Germany, he/she should definitely choose to study in Germany. The investment made in studying in Germany will be highly profitable.

For a current Salary of INR 25 Lakhs (India)

Verdict: Both the above tables clearly indicate a negative NPV, IRR and Profit values for salaries between INR 15 and 25 lakhs in India. It is therefore not a wise decision to study MSCS in Germany for such students.

For a Current Salary of INR 5 Lakhs (India)

Verdict: NPV, IRR, and profit for students who currently earn INR 5 lakhs in India are positive and quite high. If such students get an opportunity to study MSCS in Australian colleges that rank in the top 500, they should certainly go for it.

For a Current Salary of INR 15 Lakhs (India)

For a Current Salary of INR 25 Lakhs (India)

Verdict: NPV, IRR, and Profit values for students having salaries between INR 15 and 25 lakhs are negative for the Australian colleges of all rankings. It is therefore advisable for them to keep working in India rather than studying MSCS in Australia.

What Are Some Of The World's Best Colleges/Universities To Study Computer Science?

MS CS in the US or Canada- Which is Better?

Both the United States and Canada are excellent destinations for MS in CS. However, there are few significant differences if we compare them. In terms of world university rankings, the US universities come out as a clear winner. Though living expenses are more in the US than Canada, the average earning after course is higher in the US (as shown in the tables before). Also, the US job market is bigger than the Canadian. At the same time, job opportunities in Canada are slightly more secure due to the lesser influx of students (which decreases competition in the job market) in comparison to the USA.

Conclusion: There is no doubt that for students currently earning < INR 15 lakhs in India, an MS in CS from the US is a good decision. Studying MSCS in Canadian colleges that rank in the top 100 too is a good decision for such students. For countries like Germany and Australia, studying MSCS only makes sense if a student is earning around INR 5 lakhs a year in India.

Salil Singh
Salil has a deep interest in material pursuits and philosophy. He is very fond of Table Tennis and Badminton and can be found playing it at weekends.