Thinking STEM Or MBA? Here Are 5 Top Universities in Australia For You

Of the total student populace, China is the leading contributor (30%) with India not far behind at 14%. What reasons lie behind the popularity? There has to be something Australian universities are doing right! One reason is that Australian Universities’ ranking on the global index is pretty high due to the quality of education provided. Seven of its universities come among the top 100 colleges of the world. 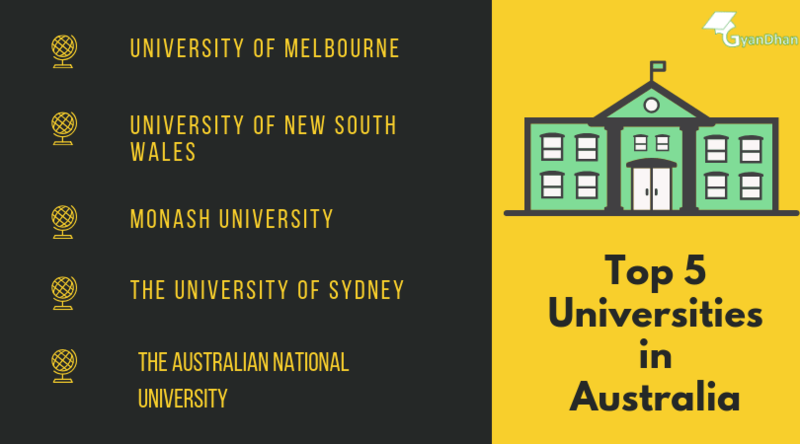 The other is the rigorous steps taken by the Australian government for improving education standards. The ESOS Act of the nation defines stringent regulations which must be fulfilled by colleges offering degrees to foreign nationals. The friendly and liberal nature of the native population adds to the list of reasons.
Another defining motive for students planning to study in Australia can be availing the work visa. Once a student has finished a course, they can apply for a Temporary Graduate visa, also known as subclass 485, or the Post Study Work Permit. The PSWV is ideal for Indian students who have completed bachelors or masters with at least 2 academic years.

Best Colleges in Australia for The Most Popular Courses

Now, that you have an overview of what it takes to choose the Great Southern Land for tertiary education, i.e., bachelors or masters; we take a close look at its five foremost institutions from the long list of colleges in Australia. We specifically take into consideration a degree in science, technology, engineering, mathematics (STEM) or management.
Since planning to study internationally requires a holistic analysis of tuition fees, books, food, rent, and transportation, we’ve provided the cost of choosing each of the top five Universities in Australia and the pay they are likely to get you on completion of the course opted.

Located in the inner-city suburb of the Melbourne city, the university is the second oldest institution in the country established in 1853. Ranked by QS at the 39th position, the university’s tuition fee for two years for an international student is 84,755 AUD. In addition to tuition fee, you would also have to pay about 19,600 AUD from your pocket as living cost for two years.
The total amount comes around AUD 104,000 which is not too hefty considering the world recognised schooling the institute offers and its average pay package. To give a broad idea, here are three degrees from the University of Melbourne and their median salaries:

Located in the suburbs of Sydney, the college was founded in 1949. Presently, internationally it is at the 45th position in QS rankings. If you choose UNSW as your STEM graduate school, you will have to shell out about 92,440 AUD for two years of tuition fee. The corresponding living expenses will be about AU$ 21,000.
The total amount to study in UNSW will reach approximately 113,000 AUD, a worthy investment for the value of education it provides. To give a comprehensive idea, here are three degrees from UNSW and their median salaries:

Another top university with campuses located in different suburbs of the Melbourne city, it is the ‘newest’ university in Australia out of the five listed in this article. It is now ranked as the top 59th university in the world and was established in 1958.
To aid in the price vs. return balance, you will have to bear only AUD 97,400 while studying at Monash. It includes:

To give a basic idea, here are three degrees from Monash and their median salaries:

4. The University of Sydney

Established 169 years back, the school is not only known for being the first in the country but also one of the leading places to study across the globe. The University of Sydney is the crown jewel of Australia’s top universities.  Currently, it is placed at the 42nd rank on the list of top world universities, weighing the quality of education with affordable liveability puts it at a high position.
For international students, the tuition fee of the school rounds off to AUD 67,000 for two years and cost of living to AU$ 21,000. When you see the complete picture, the university turns out to be the most economical option to avail world-class education in Australia with the total investment of 88,000 AUD. To give a comprehensive idea, here are three degrees from the institute and their median salaries:

ANU has the distinction of being the only university in Australia that was created by the Parliament of the nation. It was formed in 1946 and today holds the prestigious position of 24th top university of the world in QS rankings.
When it comes to finances, the college asks for the capital of nearly 103,000 AUD for two years. Out of this, AUD 17,000 is for living there and AUD 86,000 for tuition fee. To give a generic idea, here are three degrees from ANU and their median salaries:

Factors other than the Cost of Studying in Australia

For studying in Australia, money is an essential element, but it should not be the deciding factor. Getting an education loan for abroad is a relatively quick process with a platform like Gyandhan. We offer a three-step process which can be completed mostly from the comfort of home.
What matters, considerably, is the course you select. A degree in a STEM course leads to exciting opportunities that range from securing an academic position to being a top executive with a six-figure salary in a corporate. Similarly, an MBA adds a number of soft skills that increase employability and expected salary.
Read Also:-

How to Plan your Education Loan Repayment