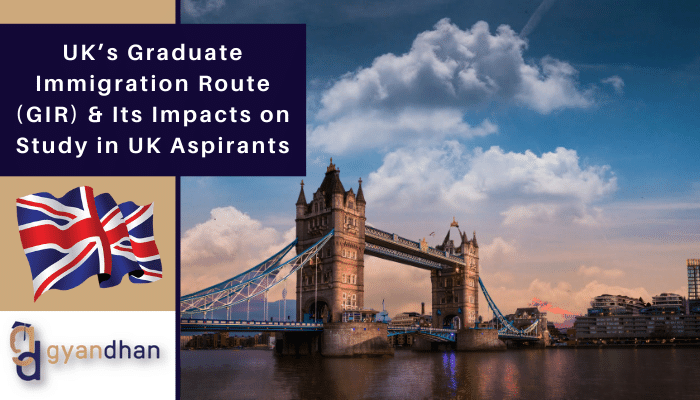 Gone are the days when foreign students studying in the UK had to return to their homeland just after the completion of their course. The UK government introduced the Graduate Immigration Route (GIR) in 2019 which allows international students to enjoy an extended stay of 2 years after studying in the UK. This route will be implemented in the summer of 2021 and any overseas student who graduates in the UK in & after 2021 will be eligible for it.
With the introduction of this new policy, a new set of speculations have arisen, especially as to what impact will it have on the international students aspiring to get higher education in the UK.

What is the Graduate Immigration Route (GIR)?

Graduate Immigration Route (GIR) is a new immigration route that will enable international graduates to stay in the UK for 2 years post-study. In this period, students can work (in any sector or at any level) or can look for work in the country. This period is not extendable.

Need Free Guidance on Admissions In the UK?

Fill This Form And Get In Touch With An Expert

Proceedings Of The Announcement

What Do The GIR Rules Constitute?

What are the GIR Eligibility Criteria?

What Will Be The Impact of GIR On International Students?

Introducing GIR was a strategy that was aimed at increasing the total number of international students studying in the UK. While the current level of such students was 460,000 (2019-20), this move aims to increase this number to 600,000 each year by 2030.

Outside the European Union, maximum international applicants are from China and India. Since these students invest a lot of money in their overseas education, the post-study work option is crucial for them. The cost of higher studies for Indian students in the UK is up to GBP 38,000, which is equivalent to 36 lac Indian Rupees. Add to this the living costs and other miscellaneous costs, and the cost to the student’s family exceeds 50 lac rupees. Since the starting salary for Indian students in the UK is likely to be five to ten times of what they are likely to earn in India (after converting the salaries), students would love to work in the UK before heading back as the salary earned would help them cover a major part of the cost spent on education and repay their education loans faster if they had taken any.
Prior to GIC, it had always been difficult for many students to find a job within four months, since many companies in the UK would prefer native employees too. But with this welcome change in post-study stay allowance, more and more students - especially from India - would shift their attention to studying in the UK. The result would be a win-win situation for both India as well as the UK - as the former would be endowed with better career options and higher financial returns, while the latter would have more quality graduates contributing to their country’s economy and credibility.

Get Help in Studying in the UK

GIR promises to be a boon for study abroad aspirants. Undoubtedly, the UK hosts some of the best universities in the world, but the course and university options are enormous, so much so that it can get mind-boggling at times. If you too are a study in the UK aspirant, then contact Gyandhan right away! Our study abroad counsellor will help you determine the right UK university and course option for you.

If you need help in financing education in the UK, you can simply get in touch with us. Since the launch of GIR, GyanDhan has coordinated with several lenders to offer students more options as unsecured loans. The approval rate has also increased exponentially with a reduced risk for lenders. In short, via GyanDhan, education financing for the UK has become way easier for study abroad aspirants. We will fetch you the most cost-effective education loan deals for study in the UK. Request a call back here or check your loan eligibility here for the UK education loan.