Why is Germany a Good Option for Abroad Education Post-COVID 19?

It would be an understatement to say that coronavirus has changed the way the world worked. With schools, colleges, offices, shopping complexes, and many other places being shut, the world indeed came to a halt that seemed indefinite.

With countries grappling with the effects of the virus and its huge impact on the economy, one of the major questions posed is the opening and running of the universities again. Many abroad universities decided to opt for remote learning or online classes. This solution, however, wouldn’t be applicable to several courses that require in-person teaching. Owing to this, as many as 40% of students have changed their abroad education plans. The change is not only limited to deferring their admissions or dropping the plans completely, but it has also led to students changing their target country. Where earlier the majority of the students preferred the USA for their abroad higher education, the trend now has shifted to include Germany, UK, and Canada as the top abroad education destination. Among these countries, Germany has further come out as the top contender for higher education. 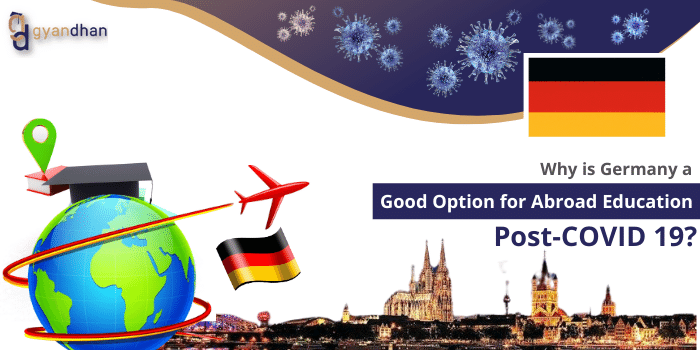 European countries were predicted to come out of the global slump much faster than the rest of the world. Out of these, Germany, with its best healthcare system, has had the best response and slowed down the spread of the virus more successfully than its counterparts.
We believe that Germany will be the most favored country by international students for Summer 2021 and Winter 2021.

Fill the form below

What Are The Steps Taken By The German Government To Effectively Control The Spread Of The Virus?

Firstly, Germany has a well-funded healthcare system where everyone has access to medical care. There are several general practitioners and leaving the doctors to tend to the severely ill. The efficiency of the healthcare system played a significant part in flattening the curve in the country.

Secondly, Germany was not the first country to be hit by the virus and therefore, had time to materialize an action plan to deal with the spread. From going into lockdown on March 22nd to increasing the number of hospital beds, the German government left no stone unturned to slow-down the spread. The result of the lockdown is commendable as the number of cases peaked just the week after the lockdown but since then have only declined.

Thirdly, Germany conducted extensive testing and was the first country to develop a rapid COVID-19 test. They were able to test up to a million people a day. The extensive testing significantly helped to check and eliminate the infection to a great extent.

What Does This Mean For International Students Aiming For Abroad Education?

Within 2 months, Germany was able to effectively control the spread leading to a reopening of the country stepwise. The success of the country is sure to attract a huge number of international students as the country goes back to normal with fewer restrictions.

With a Steady Decrease in the Number of Cases, The Country Has Reopened

Germany was once one of the top 10 worst hit nations in the world with more than 6000 cases being reported on three consecutive days. This was the result of the extensive testing that helped the country to gauge the spread and impressively quarantine the infected people without overwhelming the healthcare system. The country was able to successfully bring down the number of reported cases to less than 500. The strict social distancing rules and highly cooperative citizens even brought the number of cases reported to a staggering 172 after the lockdown was eased.
This has helped the country to reopen on May 3rd. It was a controlled opening with restrictions, such as social distancing and face masks, in place but nonetheless, it is a ray of hope in these diseased-ridden times. The reopening of the country has not only lifted the spirits of the people but has also helped the economy.

Travel Restrictions Are Being Eased Steadily

Beginning 15th June, travel restrictions have been lifted for 26 European Union countries, Britain, and countries in the Schengen area that are not in the EU. Entry restrictions and strict border control have also been lifted. However, entry from all other nations is not possible at present. This may change from 1st July onwards as the country might allow entry from the developing nations as well.
Another positive news on this front is that visa processing for international students has resumed in anticipation of the travel restrictions being lifted completely in July. The visa applications are being accepted, though only to a limited extent. Classes for the Winter semester will start later than usual, on 1st November 2020. Though no specific announcement has been made for the Master’s programs, the applications for Bachelor’s will be moved to a further date.
This is another news that is sure to lift the spirits of the international student body as it exhibits the readiness of the country to open its borders and universities to commence the sessions. However, this is not an indication that the country is being reckless. Rather German Vice-Chancellor Angela Markel has conveyed that the lockdown restrictions could again take effect by irresponsible behavior.

It is assuring that the government is working to keep the second wave of the virus at bay while also getting the country back on track.

Businesses Are Expecting To Pick Up Post-Lockdown

Major businesses, shops, restaurants, schools have opened up in the country after the lockdown was lifted partially. Even car manufacturers have restarted production. All this while maintaining strict social distancing rules. Many companies are pessimistic about the prospects, but there is still a flickering hope that the country will bounce back faster from the pandemic as compared to other European countries. Though the road to recovery is long, the support from the government is sure to speed things along. To this effect, the government announced a 130 billion Euros stimulus package to help the economy.
This is another aspect that makes Germany a good option for Summer 2021 and Winter 2021 as the country would have recovered almost completely by the time they graduate. The worst of the unemployment crisis would be behind them and job prospects will again glimmer with hope. This news is positively contrasted with the recent announcement by US President, Mr. Donald Trump, who announced the ban on the H-1B visa on 23rd June 2020. Though the order is temporary, it is sure to drive away students from US universities to German universities.

The quick response of the government, widespread testing, strict measures, early exit from the lockdown, are all the positive signs that are needed to make a decision regarding the abroad education in these times. Germany has shown exceptional response to the pandemic and has come out victorious. Though it is still dealing with cases but the majority of the country has resumed its normal activities.

Are You Planning To Apply For MS in Germany For 2021 Sessions?

Germany is a sought after country for MS and after this pandemic, the popularity of the country is definitely going to shoot up. We believe that the competition for the admissions into German universities will be higher as students will look for alternatives to US and UK universities, countries where the spread of the virus is still strong. In addition to controlling the virus, Germany has become a strong contender in Europe because of Brexit, boosting its appeal.
If you are planning to apply to Germany for MS, this is the right time to start preparing your applications. While you study for your various standardized tests, building a strong profile such as drafting SOPs, getting LORs, should be a priority. Exploring and shortlisting German universities, documentation, and applications are other essential aspects that need attention. To ease the process, GyanDhan has partnered with the best counselors that assist students in every step - from shortlisting universities to reviewing SOPs. Usually, admission consultants charge hefty amounts of money. With GyanDhan, you can get heavy discounts on admission counseling. We ensure that you get the topnotch service at attractive prices!